Bromance through the ages

Autor: Ola w dniu czerwca 18, 2016
Why is the male friendship so fascinating a topic that it has generated so many cult stories in the human history? I hope that analysing three chosen TV bromances more closely will let us get to the bottom of the matter. We will start with a bit of tongue, though. 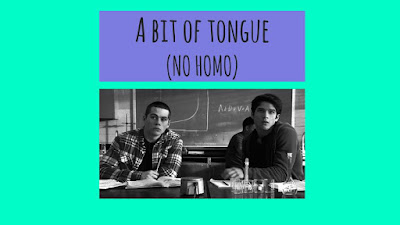 I chose three very popular bromances from TV series in hope of discovering what makes it so fascinating. I mean, nobody ever coined a term for female friendship, right? It’s just called friendship. And yet, we celebrate bromance on screen.

We will start with a bit of linguistic introduction. Then I’ll present a few popular bromances. In the main section I’ll analyse in more detail the three selected pairs, drawing similarities between them. Finally, I hope to show you a common ancestor for all the bromantic pairings? Shall we start then?

A BIT OF TONGUE

There are many, many bromances I won’t be talking about and Stiles’ and Scott’s relationship is one of them. But I just couldn’t not include Dylan O’Brien. I added NO HOMO as a subtitle of this part, but in fact bromance is very often all about the homosexual subtext. I will discuss it later on in a bit, but it isn’t really the main focus, so I will only scratch a surface of this very fascinating topic. For those interested in it I can recommend a book edited by Michael DeAngelis titled “Reading the Bromance: Homosocial Relationships in Film and Television (Contemporary Approaches to Film and Media Series)“ - it is a collection of essays analysing different screen duos. 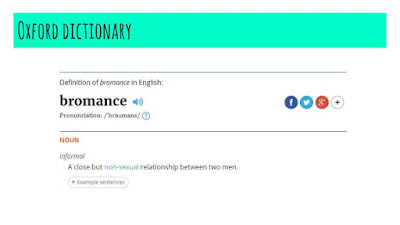 Let’s start with defining the word, shall we? Oxford Dictionary, the one that chose emoji as Word of the Year, proving to be very hip, defines “bromance” as “close but non-sexual relationship between two men”. Well, it isn’t very informative, is it? I’d also argue “two men” part - the musketeers were definitely involved in a bromantic relationship (“All for one and one for all” and so on), even if the word didn’t exist back then.

Let’s check Urban Dictionary, which is my favourite when it comes to new words and expressions. There are many definitions to choose from, since every user can add their own, but I decided to present this one, by Vinnie Rinnay, since this is the one closest to my own private definition. I’d like to point out the use of “love” as the dominant emotion, and also the exclusion of women as not being able to understand what the bromance is all about.

Bromance is the portmanteau. This means two words merged together to better convey the meaning of both of them. In this case it is brother and romance. The word itself is really new, it was first used by Dave Carnie in “Big Brother Magazine” in the late XX century to describe the relationship between skaters who lived together, spent time together and went on road trips together. It became an instant hit and started to be widely used since then.

I find it useful to look through the whole family of that word. In this case, the adjectives and colloquial phrases are the most useful. There is “bro code”, a set of rules describing what is and what isn’t allowed between bros, and the topics it covers vary from approaching girls to watching sports. Of course one of the cardinal rules is “broes before hoes” - it is also the rule most often broken, especially on screen, since it can create a lot tension and a lot of drama.

As for the adjectives, well, we have “brotherly” and “romantic” and the most common connotation for both of them is love. There might be more than a grain of truth in that Urban Dictionary definition. Is it because men are so afraid of calling their deep friendship with L-word that they rather coin a new term to describe their feelings? I wouldn’t put it past them, to be honest.

Whatever the guys decided to call their relationship, there’s no denying that this type of relationship is now very common. Here you can find some of my favourite examples of dynamic duos, mainly from show business, but also politics. Some of them span through the ages and result in wonderful artistic cooperations. Some of them are fairly recent, like the Obama/Trudeau bonding over common enemy and similar world views. 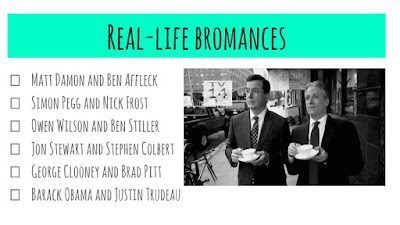 There was even a really fascinating study conducted by Elizabeth Kirby from Stanford University, in the neuroscience department. The scientists looked at the hormones levels in male rats and male chimpanzees and discovered that the males who engaged in a close relationship with another males, which involved cuddling and hugging, had higher oxytocin levels - the hormone is released by cuddling and it’s really the highest level in nurturing mothers and their babies, as well as during foreplay in sexual intercourse. That helped them to better deal with stressful situations. The ones that didn’t have this male support were more aggressive and succumbed to negative effects of stress. This prompted the scientist to formulate a proposal that this phenomenon occurred also in humans. 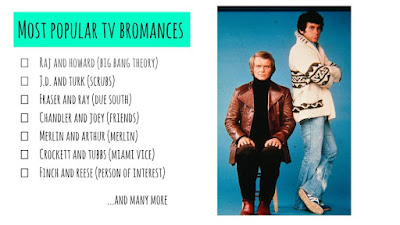 Let’s turn back to pop culture though. Here are a few of the most popular and few of my personal favourite TV bromances. At least half of them went into YES HOMO territory quite often, either for the laughs or for realsies, although none of them was really committed. This phenomenon is called queerbaiting and unfortunately more and more TV screenwriters are guilty of it. It all started in in 60s/70s with the sexual revolution and the rise of fandom. In fanzines fanfiction was being published and finally there was a first slash fanfiction, based on “Star Trek” series, and the strained relationship between Captain Kirk and Mr Spock; after all, unresolved sexual tension sells and the curse of moonlighting is taught in 101 scriptwriting.

Let’s sum up: the bromance is all about love between males, no woman could ever understand it, although she may and probably will enjoy watching it. With that in mind, I chose three pairs to be my test subjects: Sherlock Holmes and John Watson, in all their TV incarnations with the exception, for obvious reasons, of “Elementary” (although it does constitute an interesting exception to the rule and warrants a closer inspection - but not today); previously mentioned James Tiberius Kirk and Mr Spock; and, maybe less known, but no less fascinating, Old Shatterhand and Winnetou. It is important to notice one thing: all those pairs were conceived in the minds of white, straight dudes and probably weren’t created with the homosexual subtext in mind - though the love was the foundation of the relationship. But it was philia, a type of love coined by Greeks. It is worthy to note that it involves love between equals. 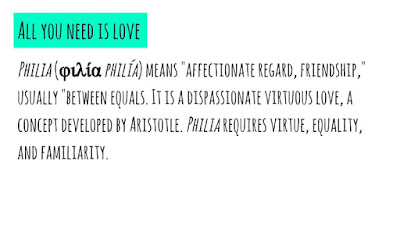 And it is known that men and women are not equal, right? Joking aside, bromance means freedom from woman-directed machismo so many men feel they should adapt as their default attitude - because it is expected of them. The male/male friendship must follow a stricter path than female/female friendship. Women and girls are allowed to hug, kiss or hold hands, while men or boys behaving like that would face immediate social ostracism. Bromance offers them an emotional outlet without them losing their perceived masculinity.

Another important feature of those three pairs is the contrast between one and the OTHER* (although it is necessary to notice that this “difference” might be class - as between Jeeves and Wooster - or nationality as in “Man from U.N.C.L.E.”.)

Winnetou is the “noble savage”. The term first appeared in a play “Conquest of Granada” by John Dryden (1672). It describes someone who is not Christian, white and civilised, but at the same time shares values (and philia) with white men. Although he has their respect, he will never be more than a savage - but he can be noble.

Spock is an alien. Well, technically half-alien, but he was raised as a Vulcan, with subdued emotions. I already mentioned how the onscreen chemistry between him and captain Kirk launched the thousands ship, pardon, fics, because opposites attract.

Sherlock is a weirdo; he operates outside the social norms, mainly because he’s more perceptive and intelligent,a real genius. But at the same time he can be read as autistic, antisocial, above mere mortals.

One more thing that those three pairs have in common is tragic death (in the arms of a brother) of the other. Winnetou dies while saving other people, Spock sacrifices himself because:

And Sherlock “dies” either to free the world from Moriarty or to protect people he cares about.

A TALE AS OLD AS THE WORLD

All these bromances have one common ancestor. They share it with Achilles and Patroclus and with Alexander and Hephaestion. The bromance as we know it (although not as we call it) first appeared in “Gilgamesh”, with the difficult friendship between the titular character and Enkidu. I’d argue that Enkidu is the other (since he had to get civilised first in most versions of the story) and his fate is the tragic death - which then prompted the whole Orpheus and Euridice myth. So whenever you enjoy reading or watching a bromantic relationship, please spare a thought for those two Sumerian guys. 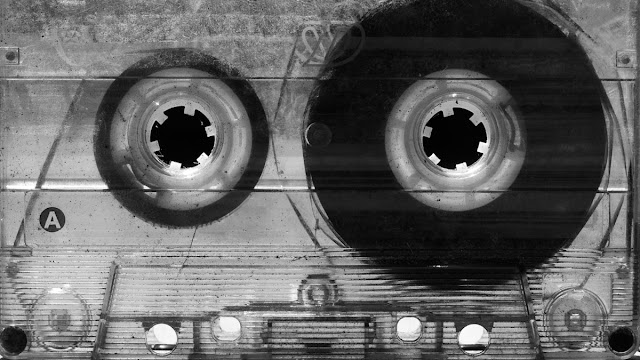